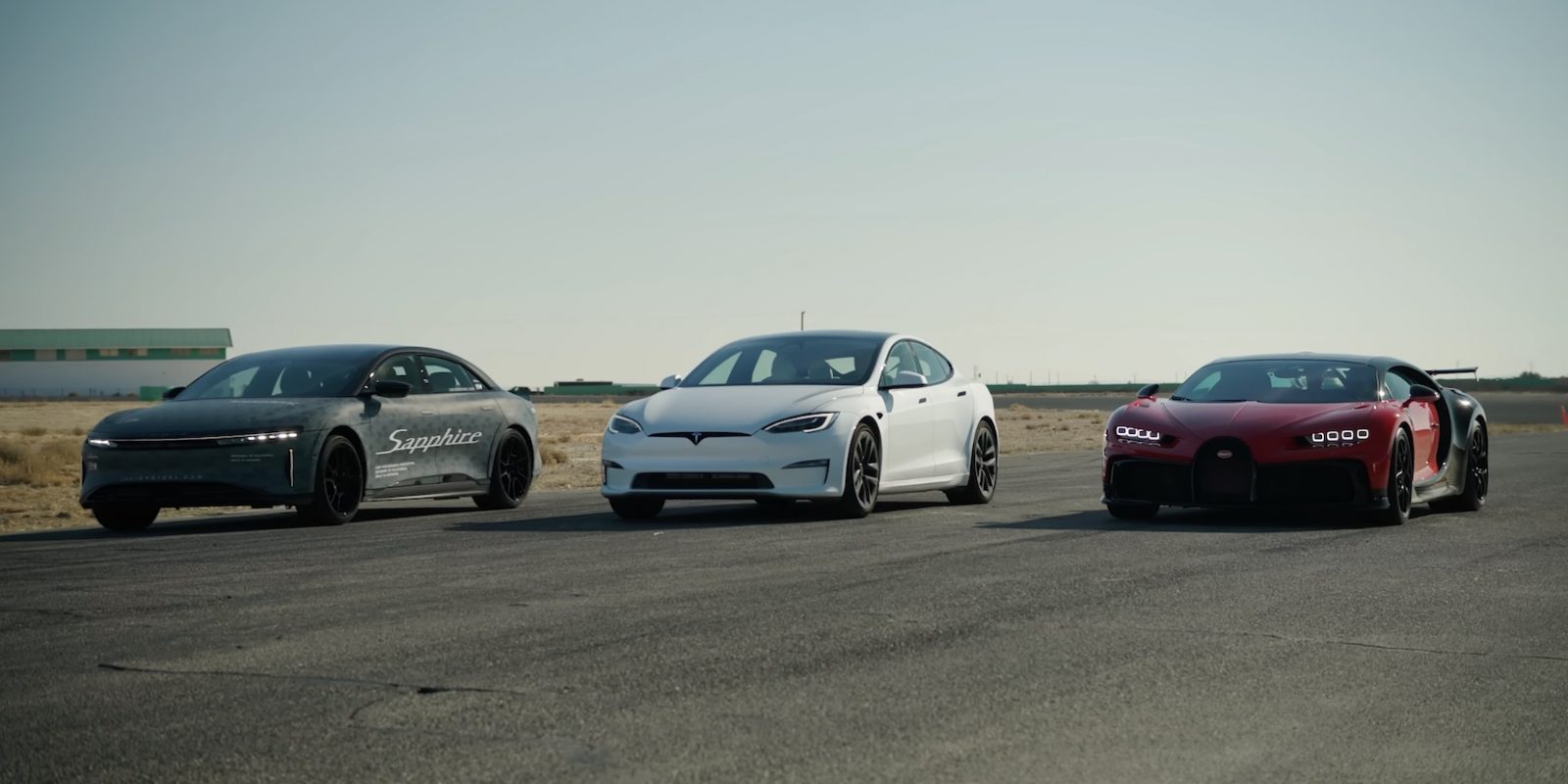 Since the Tesla Model S Plaid was launched in 2021, it’s basically been the boss at the drag strip. Outpacing gasoline-powered supercars like the Lamborghini Aventador and Nissan GT-R, it is officially recognized as the fastest accelerating production car on the planet with a 0-60 time of 2.1 seconds. Or should I say—it was.

Yes, that’s right, the Plaid has been unseated. Now, Elon Musk’s nightmare and the new king of the drag strip is the 3-motor, 1200-plus horsepower Lucid Air Sapphire.

Just to recap, Lucid is a start-up EV manufacturer that was founded in 2007 and is based in California. Their first two EVs were the Lucid Air and the Dream, which is to be followed by the much faster Sapphire, thanks to the addition of a third electric motor.

The result was mind-blowing. In the first battle, the Sapphire faced off against the triple-motor 1,020-hp Plaid and the 1,479-hp Chiron. As expected, the Lucid creamed the competition. The Sapphire might be nearly 600 lbs heavier than the Plaid (and nearly 1000 lbs heavier than the Chiron), but thanks to its third motor, extra horsepower and brilliantly engineered all-wheel-drive power delivery, the Lucid literally left the Tesla and Bugatti in its wake.

When the Sapphire crossed the finish line, it had jumped from 0-60 mph in 2.1 seconds—the same as the Tesla, but more importantly, the Lucid reached the quarter-mile barrier in a record-breaking 9.1 seconds at 156 mph, beating the Chiron’s 0-60 in 2.3 seconds and its 9.3-second quarter-mile at 156-mph, while the Plaid also clocked 9.3 second time but at a slower terminal velocity of 152-mph.

The only reason the Bugatti did not win is that it ran out of drag strip. Given a little more track, the Chiron would have hunted down the Lucid and crushed it with that 1,479-hp W12 engine.

For the record, when Hagerty tested the Tesla Model S Plaid against the twin-motor 1,111-hp Lucid Air over 6 months ago, the Plaid won easily. But now, the Sapphire has around 100 extra horsepower plus that third motor, which is situated at the rear, and that’s what makes all the difference. Rear traction, or should we say—getting the power down instantly at the rear is what allowed the Sapphire to win so convincingly.

Hagerty was first to do a comprehensive back-to-back quarter-mile test.

In fact, that’s exactly why the Lucid also beat one of the fastest motorcycles on the planet—the 210-hp Ducati Panigale V4 SP2, ridden by none other than MotoAmerica champion Josh Herrin. Even though he rode an almost perfect race, he could still only manage a 9.3-second quarter-mile at 157 mph.

While Lucid may not come right out and say that its goal in producing the Air Sapphire electric sedan was to “one-up Tesla,” many pundits will expound that this is precisely what has happened. Regardless of Lucid’s true intent, it not only one-upped the Tesla Model S in a few key categories that would get people’s attention, like range and charging but also in just about every category you can imagine.

In addition to being fastest over the quarter-mile, the Sapphire has more range, faster charging, a more luxurious cabin that’s quieter, more comfortable seats, a more impressive windshield, and a much larger and more useful, powered opening and closing frunk.

So the Sapphire can sprint from zero to 60 mph in the same time as the Plaid, but it then pulls away strongly to post a new world record production car time of 9.1 seconds for the quarter-mile. It’ll be fascinating to see how Musk responds to this new record, a time that unseated his champion. Because the Lucid also just happens to have a classier interior, faster charging and more range, and that is the cheekiest way we can think of to dethrone Musk. Not just once, but four times! Do we see a speed war breaking out between Tesla and Lucid? Hmmm…