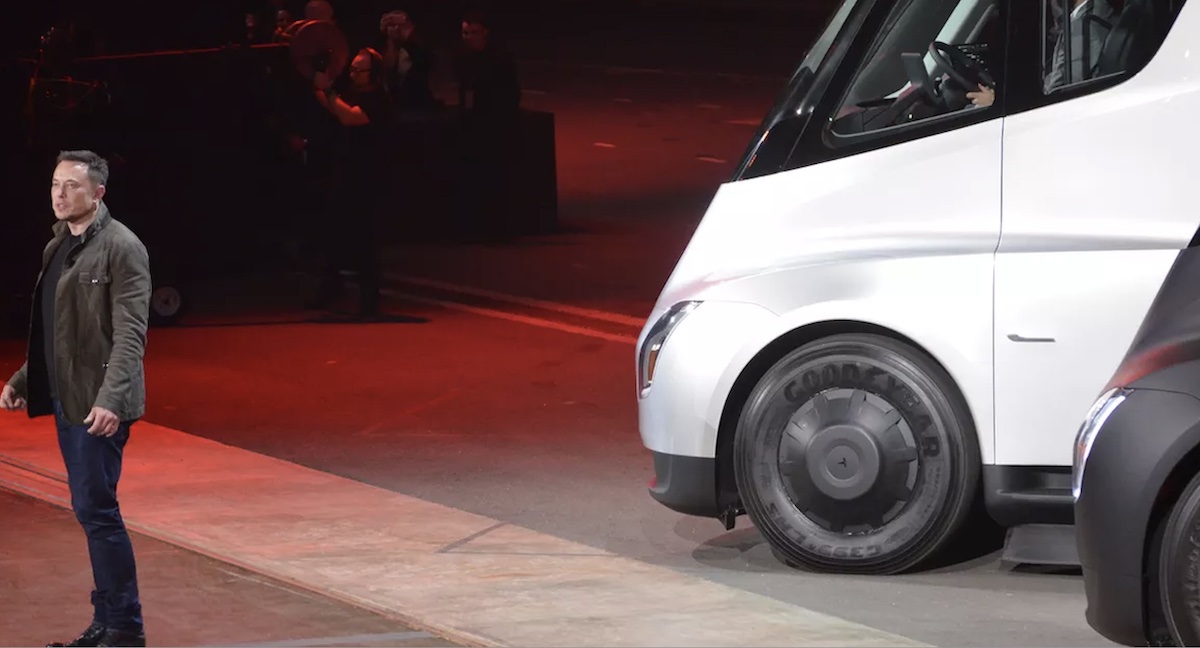 Luckily Elon Musk enjoys the limelight. In a Tweet on December 1st, the Tesla CEO announced that Tesla is finally introducing its long-awaited all-electric Semi trucks.

The first Semi shipment, which was unveiled five years ago, was delivered to PepsiCo’s Modesto, California, factory Wednesday, and the Tesla Semi program manager Dan Priestley said during a live-stream event at the electric vehicle company’s Nevada plant.

The Tesla CEO thanked PepsiCo for being “a solid partner” as Priestley symbolically handed over keys to executives Kirk Tanner and Steven Williams, who were receiving them.

Musk is always prone to exaggerating when talking about new products—as he did with the Cybertruck (and its supposedly bullet-proof glass)—and this time was no different.

“It’s been a long journey, a long five years, but this is going to really revolutionize the roads and I think make the world a better place in a meaningful way,” Musk added.

So what is this truck all about? The Semi boasts a 500-mile driving range, as proven in a real-world test that was shared in a time-lapse video between Fremont and San Diego. The truck was loaded with 81,000 lbs and charged to full capacity.

The Semi’s 500-mile, single-charge trip proves that the electric vehicle maker was not exactly bonkers when it announced the Class-8 electric truck specs five years ago. It should be noted that the Semi was met with a lot of skepticism when it was unveiled, with a Daimler Truck AG executive even saying, “…that the vehicle’s target specs — such as its 500-mile range — practically break the laws of physics.

“It’s not like 500 miles with no load, with special aero, and special everything. It’s fully loaded,” Musk said at the event as an image of a Semi displayed on the screen behind him with a caption stating it completed the test with 4% battery left.

Oliver Dixon, senior analyst at consultancy Guidehouse, however, was among those casting doubt on the vehicle’s capabilities after Musk didn’t take questions following the end of the presentation.

“Not very impressive — moving a cargo of chips (average weight per pack 52 grams) cannot in any way be said to be definitive proof of concept,” Dixon said. Musk claimed when he first unveiled a Tesla Semi prototype five years ago that it would begin its production run in 2019. It was not.

The vehicle is coming three years late, but pandemic disruptions and supply chain issues might just be partially to blame. Just a few days before Thursday’s event, French automaker Renault completed deliveries for Coca-Cola with a fleet of electric trucks — jumping ahead of Tesla’s own agreement with Pepsi.

I can’t really see how a mammoth, super heavy Semi will make the world a better place in a meaningful way. Obviously, it will transport goods and services for up to 500 miles as seen in the time-lapse video. Yes, it is very effective but I can’t help but wonder how they are going to top up the batteries in these Semi trucks—given that they require huge amounts of electricity and capable charging stations.